Susan Adams Forbes Staff
I’m a senior editor in charge of Forbes’ education coverage.
Welcome to Hogwarts! That's what you expect the bellhop to say as he points you toward the labyrinthine hallways of the Banff Springs Hotel. This 117-year-old castle-like hostelry in the Canadian Rockies looks and feels like the maze-like fictional school of witchcraft and wizardry from the Harry Potter books. Especially when you try to find your room amidst the hotel's seven wings, 23 elevators and 33 stairwells.
It's worth the navigational effort. Though the picturesque town of Banff and surrounding Banff National Park beckon with world-class skiing, mineral hot springs and countless other nature activities, it's tempting to stay put in the castle, so numerous and luxurious are its offerings.
Another Potterish touch: Much of the hotel furniture and decoration is an exact replica of an original design from a European castle or manor house, including the full suit of armor and two massive Italian leather chests that bedeck Mt. Stephen Hall, the 2,300-square-foot 15th century gothic reception area in the main wing.
The hotel's 770 guest rooms range in luxury level from exceedingly comfortable to giddily baronial. The Presidential Suite, at $1,600 per night, sits atop the castle's highest tower and is reached by a private glass elevator. More modest accommodations can be had for as little as $185. All rooms look out on stunning views of the Bow River valley on one side of the hotel and of the Rockies all around.
Outside your room, a full roster of activities awaits within hotel grounds. For serious swimmers, a 32-meter lap pool is framed on one side by windows overlooking the mountains. Cascading ferns hang from the ceiling. Though hotel staff claims the pool contains salt water, instead it seems merely non-chlorinated and almost magically pristine. 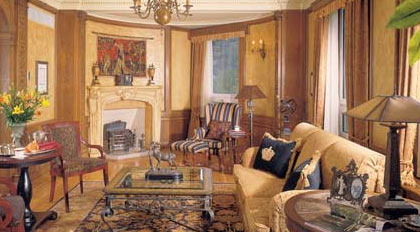 Steps away from the lap pool is a luscious Jacuzzi and just next to it is the entrance to the outdoor pool, heated to a toasty 103 degrees. That pool is best appreciated on a moonlit winter night, the craggy peak of Rundle Mountain rising above sparkling snowfields.
Ironically, the fabulous pools and Jacuzzi, available to all hotel guests at no extra cost, make the recently redone Willow Stream spa ($40 per day) seem almost redundant.
For family fun, try the hotel's game room, replete with pinball, air hockey and video games and a four-lane five-pin Canadian bowling alley. The game, with its small balls and widely-spaced pins, offers a fresh challenge to U.S. bowlers. Shoppers will find more than a dozen stores inside the hotel, including Baccarat crystal and Qiviuk, a shop that sells ultra-soft garments made from the insulating down of the Canadian Arctic musk ox.
On hotel grounds lie 27 holes of mountain golf. An 18-hole course was designed by Canadian golf architect Stanley Thompson in 1928. Another nine holes were added in 1989. Beautiful, but at $145 per round with cart, not cheap. 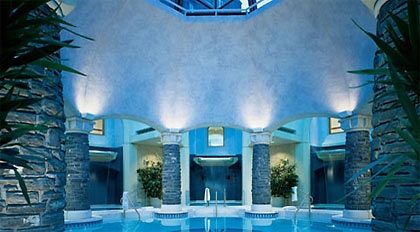 In the winter, skiing guests can choose between the local slope, Norquay, and two massive areas, Lake Louise and Sunshine Village, which sits just 20 minutes from the hotel by shuttle bus. With average yearly snow accumulation of 33 feet, a vertical drop of 3,500 feet and 3,500 acres of skiable terrain ranging over three mountains, Sunshine is one of Canada's most inviting locations. Just getting to the lifts, by high-speed gondola that rises 1,600 feet, is a scenic adventure. Once there, Sunshine has a wonderfully heady, top-of-the-world atmosphere, with more than half of the skiing above tree line. While flowers bloom at lower elevations, Sunshine stays open until late May.
Once you've worked up an appetite, you can choose from 15 dining establishments inside the hotel, including the Banffshire Club, awarded the rare five-diamond rating from the American Automobile Association.
Banff Springs is one of ' Rocky Mountain hotel triumvirate, along with the Jasper Park Lodge and Chateau Lake Louise, acquired by Canadian Pacific Hotels and Resorts in 1999. Banff lies an hour-and-a-half drive from the Calgary airport.
Forbes Fact
The Banff Springs Hotel was the brainchild of William Cornelius Van Horne, general manager of the Canadian Pacific Railway in the 19th century. Van Horne recognized the potential in Banff's scenic vistas and natural hot springs. He is credited with having quipped, "If we can't export the scenery, we will import the tourists."